Looking for an easy way to Learning of new elementary english grammar and composition for class 8 answers, Solutions. You have to learn basic English Grammar topics like Tenses Verbs, Nouns, etc… In this article, we will review the best English Grammer Topics and compare them against each other.

Research papers and scientific studies are often accompanied by large amounts of information. The records are maintained in the form of data that needs to be interpreted or analyzed to be understood. The process of inspecting, cleansing, transforming, and modeling data with the goal of highlighting useful information, suggesting conclusions and supporting decision making is described as data interpretation. There are different types of data that need interpretation, such as, line chart, table chart, pie chart and bar chart. One needs to follow a few important steps while interpreting data. He or she should read the data carefully and thoroughly, and make note of any special expression that he/ she comes across. It requires analysis and comparison of the given facts and drawing inferences or conclusions based on them.

The following expressions are useful in interpreting data.

A. To report an increasing trend:
1. a slight/constant/marked/substantial increase in sales
2. an increase of about/roughly/approximately/in the region of…%
3. a little over/above what we predicted- the recovery/upturn began in
4. an overall increase in…
5. an upward trend in the demand for…
6. sales reached record levels/reached a peak in
7. a strong surge in the sales of… by (month) the figure had risen to …
8. we predict that sales will soar in the coming year/over the next …months.

B. To report decreasing trends:

1. just under our target
2. way below our expectations a slight/notable/significant decrease in
3. a drop of about…% in …
4. a slight/regular/dramatic decline/reduction in …
5. the downturn began in
6. the situation began to deteriorate in
7. the number has continued to fall

C. To show fluctuations and variations:

D. To show constancy or no change:

1. has plateaued and steadied
2. has seen/registered/experienced/shown no change
3. has remained constant/static/unchanged/unaltered/ the same.

E. To report portions and proportions:

1. Two-thirds of/one-fourth of/a quarter of
2. As many as twenty percent/less than forty percent
3. As high as seventy five percent

1. appropriate measures must be taken …
2. the only option we have is to …
3. these changes are inevitable…
4. the result/outcome will be …

Important Tips
Read the instructions carefully. Carefully identify the increasing, decreasing, and fluctuations trends. Write an introductory line or an overview describing what the given chart, table or graph shows and then go on to briefly summarise the data and report the main points of your a’Iysis.

The graphs below provide information on global population figures and figures for urban populations in different world regions.

Summarise the information by selecting and reporting the main features, and make comparisons where relevant.

The global population is expected to peak at 8.2 billion by 2050, and then decline to around 6.2 billion by 2100. The predictions also show that almost all urban population growth in the next 25 years will occur in the cities of developing countries. In the developed regions, on the other hand, the urban population is expected to remain unchanged at about 1.3 billion people over the next two decades. The graphs show that the global population increase will not occur evenly throughout the world, but will be greater in some areas than others.

The following histogram shows that deaths due to violence has increased considerably during recent years. Summarise the data in about 100 words and write how an educated youth could change the situation. 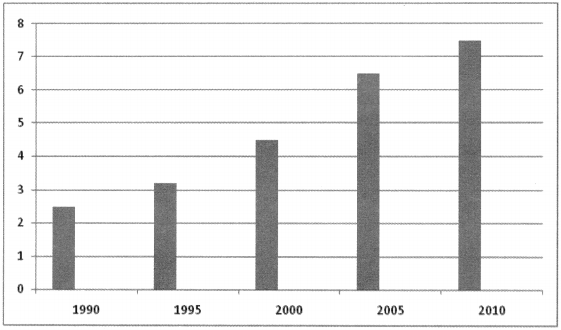