Ans. It is the maximum displacement of a vibrating body on one side.

Q2: What is called time period?

Ans. It is the time taken by a vibrating body to complete one oscillation.

Ans. It is the number of vibrations produced by a vibrating body in one second.

Q4: What are ultrasonic waves?

Ans. It is the sound of frequencies more than 20000 hertz. We cannot hear such sounds.

Q5: The maximum displacement of an oscillating object is called the ……… .

Q6:The number of oscillations per second made by the object is called the …….…. .

Q7: What do you mean by the term loudness?

Ans. The sound of high amplitude is called loudness.

Therefore,    Pendulum B has higher frequency.

Ans. Frequency of a vibration or oscillation is measured in hertz. It is the unit of frequency.

Q1: A pendulum oscillates 40 times in 4 seconds. Find its time period and frequency.

Q2: The sound from a mosquito is produced when it vibrates its wings at an average rate of 500 vibrations per second. What is the time period of the vibration?

Number of vibrations per second = 500

Q3: Identify the part which vibrates to produce sound in the following instruments:

(b) String of sitar

Q4: What do you understand by stringed instruments?

Ans. Those instruments have taut strings, which vibrate when they are plucked, struck, or played with a bow.

Q5: Which object is vibrating when the following sounds are produced?

(i) The sound of a sitar or veena.

(ii) The sound of the tabla.

(iii) The sound of a school bell.

(iv) The buzzing of a bee or a mosquito.

(v) The sound of a bursting balloon.

(i) Strings of sitar or veena vibrate to produce sound.

(ii) The skin of the tabla vibrate to produce sound.

(iii) The disc of the bell when beated with hammer vibrate to produce sound.

(iv) Wings of the mosquito or a bee vibrate to produce sound.

(vi) In the radio speakers vibrate to produce sound.

Q6: What is the normal length of vocal cords in man?

Ans. The normal length of the vocal cord of a man is about 20 mm long.

Ans. The loudness is expressed in a unit called decibel (dB). It is essentially a ratio if the actual loudness to some base loudness level. The base level is usually defined as that loudness of sound that the human ear can just perceive. The following table gives some idea of the loudness of sound coming from various sources:

Q9: A tight membrane produces sound of ……. frequency than a loose one.

(a) Friction opposes the ………. between the surfaces in contact with each other.

(d) Sprinkling of powder on the carrom board ………. friction.

(e) Sliding friction is ………. than the static friction.

(b) smoothness (or irregularities or nature)

Q2: Four children were asked to arrange forces due to rolling, static and sliding frictions in a decreasing order. Their arrangements are given below. Choose the correct arrangement.

Q3: Alida runs her toy car on dry marble floor, wet marble floor, newspaper and towel spread on the floor. The force of friction acting on the car on different surfaces in increasing order will be

Q4: Suppose your writing desk is tilted a little. A book kept on it starts sliding down. Show the direction of frictional force acting on it.

Ans. Frictional force will act upward i.e., direction opposite to that of sliding book.

Q5: Explain why sportsmen use shoes with spikes.

Ans. It is done to provide the shoes better grip on the ground.

Q6: Name the force responsible for wearing out of bicycle tyres.

(a) A ball is rolling on a road towards the north. What will be the direction of the frictional force acting on it?

Q8: What is the cause of friction?

Ans. The cause of friction is the irregularities on the two surfaces in contact.

Q9: On which kind of surface the friction will be greater (i) smooth surface (ii) rough surface.

Ans. Friction will be greater in case of a rough surface.

Q10: Does the use of ball bearing reduce or increase friction?

Ans. Use of ball bearing reduces the friction.

Q11: Why do we sprinkle fine powder on the carrom board?

Ans. We want to reduce friction in order to increase efficiency.

Q12: What are lubricants?

Ans. The substances which reduce friction are called lubricants.

Q1: Write the unit of pressure?

Ans. Yes, liquids also exert pressure. When a liquid is put in a vessel it exerts pressure on its bottom and wall.

Q3: What is gas pressure?

Ans. The outward force per unit area of the walls is called gas pressure.

Q4: What is atmospheric pressure? 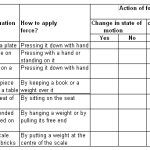 Q1: Fill in the blanks in the following statements:

Q2: An archer stretches her bow while taking aim at the target. She then releases the arrow, which begins to move towards the target. Based on this information fill up the gaps in the following statements using the following terms:

(a) To stretch the bow, the archer applies a force that causes a change in its ………. .

(b) The force applied by the archer to stretch the bow is an example of ………. force.

(c) The type of force responsible for a change in the state of motion of the arrow is an example of a ………. force.

Q3: In the following situations identify the agent exerting the force and the object on which it acts. State the effect of the force in each case.

(a) Squeezing a piece of lemon between the fingers to extract its juice.

(b) Taking out paste from a toothpaste tube.

(c) A load suspended from a spring while its other end is on a hook fixed to a wall.

(d) An athlete making a high jump to clear the bar at a certain height.

Q4: An inflated balloon was pressed against a wall after it has been rubbed with a piece of synthetic cloth. It was found that the balloon sticks to the wall. What force might be responsible for the attraction between the balloon and the wall?

(a) pressure of water.

(b) gravity of the earth.

Ans. (a) pressure of water.

Ans. A push or pull on an object is called a force.

Q7: Has force only magnitude or both direction and magnitude?

Ans. Force has both magnitude and direction.

Q8: What is the necessary condition for a force to come into play.

Ans. At least two objects must interact for a force to come into play.

Q9: We know that a force applied on an object causes either a change in its state of motion or its shape. Different types of events are listed in the following table. Tell the type of effect in each case. Q10: Name the force responsible for the wearing out of bicycle tyres.

Q11: What causes a change in the state of motion of an object?

Ans. The force of friction is responsible for change in the state of motion of an object.

Q12: What brings a ball rolling on the ground to rest gradually?

Ans. The force of friction between the surface of the ball and the ground brings the rolling ball to rest.

Q13: What force will you use to sort out pins easily from garbage? Whether it is a contact force or non-contact force?

Ans. Magnetic force act on to sort out pins and, it is a non-contact force.

Q14: When an object is thrown vertically upwards why does its speed decrease?

Ans. It’s speed decrease because the force of gravity opposes its upward motion.

Q15: What is electrostatic force?

Ans. The force exerted by a charged body on another charged or uncharged body is called electrostatic force.