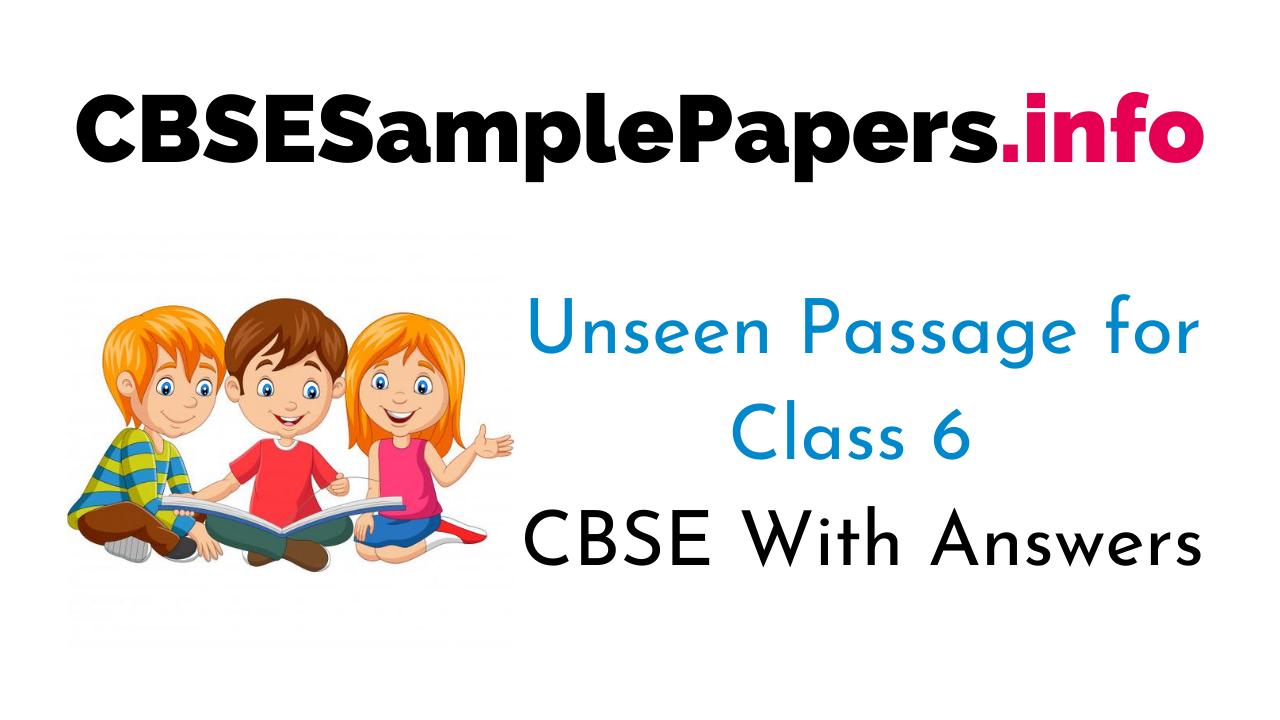 Fundamentals:
Comprehension of an unseen passage means a complete and thorough understanding of the passage.

The main object of comprehension is to test one’s ability to grasp the meaning of a given passage properly and also one’s ability to answer, in one’s own words, the questions based on the passage.

A variety of questions like short answer type questions, completion of incomplete sentences, filling the blanks with appropriate words and exercises based on vocabulary are set forth for the purpose.

Unseen Passage for Class 6 With Questions And Answers Pdf

One should also keep the following points in mind before answering questions from a passage:
1. Read the passage quickly to gain a general idea of the subject matter.
2. Read the passage again and underline the important points.
B. Read the questions and try to know what has been asked.
4. Read the passage again and underline the portions where the probable answers may be available.
5. Use, as far as possible, your own words to answer the questions in a precise and brief way.
6. Always use complete sentences while answering questions.
7. If you are asked to give the meaning of some words or phrases, try to express your idea, in your own words, as clearly as possible.
8. Don’t write your own opinions or comments about anything unless you are asked to do so.

Read the story and answer the following questions.

This is the story of a man who thought that he had the right to do whatever he liked. One day, this gentleman was walking along a busy road, spinning his walking-stick round and round in his hand, and was trying to look important. A man walking behind him objected.

“You ought not to spin your walking-stick round and round like that!” he said.

“I am free to do what I like with my walking-stick,” argued the gentleman.

‘Of course you are,” said the other man, “but you ought to know that your freedom ends where my nose begins.”

The story tells us that we can enjoy our rights and our freedom only if they do not interfere with other people’s rights and freedom.

A. Answer the following questions.

Questions:
1. Why was the gentleman on the road moving his walking stick round and round?
2. Who objected to his behaviour?
3. What argument did the gentleman give?
4. Was the other satisfied with argument?
5. What did he say in reply?
Answer:
1. The gentleman on the road was moving his walking stick round and round because he wanted to look important.
2. A man walking behind him objected to his behaviour.
3. The gentleman argued that he was free to do whatever he liked with his walking- stick.
4. No, the other man was not satisfied with his argument.
5. The other man said that he ought to know that his (the gentleman’s) freedom ends where his (the passer-by’s) nose begins.

B. Complete the following statements with the correct option.

C. Write whether the following statements are true or false.

King Alphanso got down from his horse. He went to help the mule-driver. Both of them pulled and pushed until they succeeded in getting the mule on the firm ground. By this time they were covered with mud. A number of people had gather around them by that time and they stood by watching. Then someone recognised the King. People began to whisper to each other that it was the King himself who had helped the mule-driver. When the mule-driver heard this, he was very frightened. He turned i to him and begged for his forgiveness. Alphanso told that he had done his duty as a man. He may be a king but as a man he should help those who are in need. The King thus put to shame all those passers-by who would not help.

William Wordsworth, the famous British poet, was one of the most important poets of the Romantic Movement in English Literature.

He was born on 17 April 1770, in the scenic region of north-west England called the Lake District. The beautiful landscapes of the region had an enduring influence on Wordsworth’s imagination, creating in him, a love for nature. This can be seen in most of his poems. Wordsworth lost his mother when he was eight and at the age of thirteen, his father. Of his four siblings, Wordsworth was most attached to his younger sister, Dorothy. Several of his poems are addressed to his beloved sister.

Wordsworth began attending St. John’s College, Cambridge in 1787. He often spent his holidays on long walking tours, visiting places famous for the beauty of their landscape. In 1790, he took a nearly three-thousand-mile walking tour of Europe, during which he toured the Alps extensively, and also visited nearby areas of France, Switzerland and Italy. The following year, he graduated from Cambridge without distinction.

In 1843, Wordsworth was made the Poet Laureate of England. A Poet laureate is the official poet of the King of England. By this time, Wordsworth was considered one of the greatest poets of his age. However, when his daughter Dora died in 1847, Wordsworth stopped writing poetry altogether. He died, three years later, on 23 April 1850.

Wordsworth was one of the first poets to actively reflect on the beauty and glory of nature and the power of imagination. His poems continue to be read all over the world by children and adults alike.

Unseen Passage Class 6 CBSE – 3
Read the given passage and answer the questions that follow.

Art Around The World

Art is important all around the world. It can be amusing, entertaining, informative and inspiring. Or it can be threatening, disturbing and challenging. It can strengthen traditional values, spread new ideas or preserve a treasured heritage from past times.

The ancient Greeks were the greatest sculptors of the ancient world. They used sculptures to decorate their temples. The Greeks were experts at turning stone into life-like imitations of real people.

Traditionally, Native Americans carved tall tree-trunks into towering totem poles, and placed them outside the homes of powerful families. They were signs of high rank, and records of family history, they were sometime also thought to have protective powers.

Once a father asked his daughters, “What is the sweetest thing in the world?” ‘Sugar!’ said the elder daughter. ‘Salt’, said his younger daughter. The father thought that his younger daughter was making fun of him, but she stuck to her opinion. The father was obstinate, and so was his daughter. A quarrel broke out between them over this petty matter, and he drove her out of the house saying, “If you think that salt is sweeter than sugar, you had better find another home where the sugar is more to your taste.’

It was a beautiful summer night. The pretty maiden sat singing sadly in the forest around her father’s cottage. A young prince, who had lost his way while hunting the deer, heard her voice. He came to her to ask the way. He was struck by her beauty and took her to his beautiful palace and married her.

The bride invited her father to the wedding feast, without telling him that she was his daughter. All the dishes were prepared without salt. The guests began to complain as they ate the tasteless food. ‘There is no salt in the meat!’ they said angrily.

‘Ah,’ said the bride’s father. “Salt is truly the sweetest thing in the world! But when my daughter said so, I turned her out of my house. If only I could see her again and tell her how sorry I am!”

Drawing the bridal veil aside from her face, the happy girl came to her father and kissed him. Now properly salted dishes were brought in and all the guests were satisfied.

Answer the following in one or two sentences each.