Looking for an easy way to Learning of new elementary English grammar and composition for class 8 answers, Solutions. You have to learn basic English Grammar topics like Tenses Verbs, Nouns, etc… In this article, we will review the best English Grammer Topics and compare them against each other.

Action Verbs
While there are several types of verbs, today’s lesson will focus on action verbs. Action verbs tell what the subject of a sentence is doing. Words like navigate, climb, swing, slide, told and answer are action verbs.

Can you think of verbs for actions you completed today? You may have brushed your teeth, put your shoes on, smiled at your friend, and drank your water. For the rest of the day, think about what you’re doing. What verbs can you think of?

Verb Tense
Verbs have different forms to show whether something already happened, is happening right now, or will happen in the future.
Examples:

Kinds of verbs
Action verbs
An action word tells what the subject does. (build, laugh, walk, express) or that it exists. (is, are, was, were)
Examples:

A helping verb tells when the action of a sentence takes place. The helping verb be has several forms am, is, are, were, and will.
Examples:

A linking verb links a noun or an adjective in the predicate to the subject. Forms of the verb ‘be’ are the most common linking verbs. Linking verbs can be used in all three tenses.

Transitive and Intransitive Verbs
An intransitive verb can stand alone in the predicate because its meaning is complete.
Example: 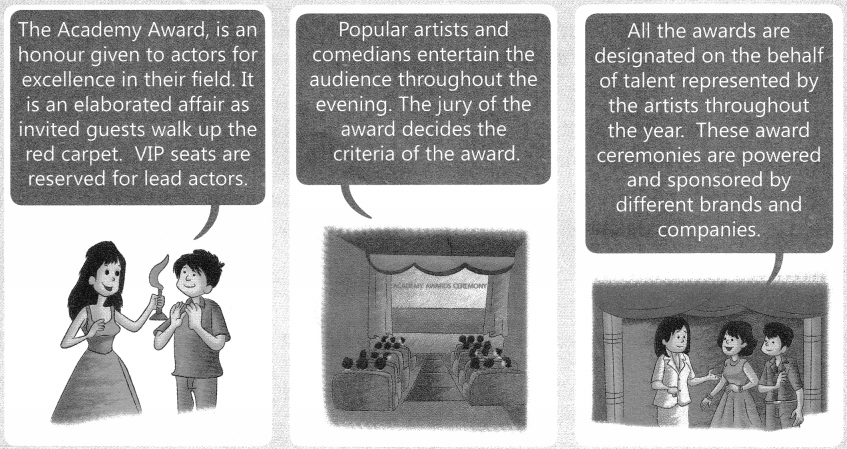 A. Answer the following questions.

1. What did you learn about the Academy Award from the story?
2. What does the jury decide about awards?
3. By whom are the awards sponsored?

B. Underline the correct verb in each of the sentences below.

1. Meena and her parents (visit/visits) each other often.
2. Either the cups or the glasses (are/is) in the dishwasher.
3. Veena and Firoz (need/needs) a ride to work.
4. There (is/are) a dog, a cat, and a bird in the garage.
5. Neither Madan nor his brothers (was/were) at the party.
6. Here into the main ring of the circus (come/comes) the trained elephants.
7. Either the workers or the boss (deliver/delivers) the merchandise.
8. The committee (work/works) hard for better schools.
9. There (is/are) many things to do before the holidays.
10. The jury members (was/were) unanimous in their decision.

A. Underline the subject (or compound subject) and then tick the verb that agrees with it. The first one has been done for you.

1. Everyone in the telecom focus group (has/have) experienced problems with cell phones.
2. Your friendship over the years and your support (has/have) meant a great deal to us.
3. Hamilton Family Center, a shelter for teenage runaways in San Francisco, (offers/offer) a wide variety of services.
4. The main source of income for Trinidad (is/are) oil and pitch.
5. The chances of your being promoted (is/are) excellent.
6. There (was/were) a Pokemon card stuck to the refrigerator.
7. Neither the professor nor his assistants (was/were) able to solve the mystery of the eerie glow in the laboratory.
8. Many hours at the driving range (has/have) led us to design golf balls with GPS locators in them.
9. Discovered in the soil of our city garden (was/were) a button dating back to the Civil War.
10. Every year, during the midsummer festival, the smoke from village bonfires (fills/fill) the sky.
11. The story tellers (was/were) surrounded by children and adults eager to see magical tales.

B. Edit the following sentences to eliminate problems with subject-verb agreement and write the edited sentence. If a sentence is correct, write “correct.”
Example:

C. Underline the subject and correct verb for it in the following sentences.

1. Somebody (steal, steals) my morning paper nearly every morning.
2. Both (argue, argues) on the phone.
3. Some pizza (has, have) been saved for later.
4. Half of the answers (was, were) correct.
5. Half of the assignment (is, are) already complete.
6. Most of the ice (melt, melts) in the spring.
7. Neither of the employers who interviewed me last week (has, have) called with the results of their interviews.
8. A small group of parents (hope, hopes) to meet Sunday to discuss travel arrangements for their children touring Southeast Asia in the fall.

D. Underline the subject of the sentence and the correct verb for it in the following sentences.

1. Evidently, neither of the professors (is, are) aware that the letter of complaint (has, have) been linked to him.
2. Either her brother or her parents (has, have) Lata’s address in Mumbai.
3. There in the middle of the aisle (was, were) my abandoned cart along with all of the items I had intended to purchase.
4. It should be perfectly clear by now that all of us (do, does) not agree with the motion as it stands now.
5. My mother and my best friend (has, have) often discussed the practicality of educating children at home.
6. Somebody (leaves, leave) (his, their) computer on after work, and I intend to discover who that it.
7. Every Fourth of July, every car and truck in town (lines, line) up along the waterfront for the annual fireworks display.