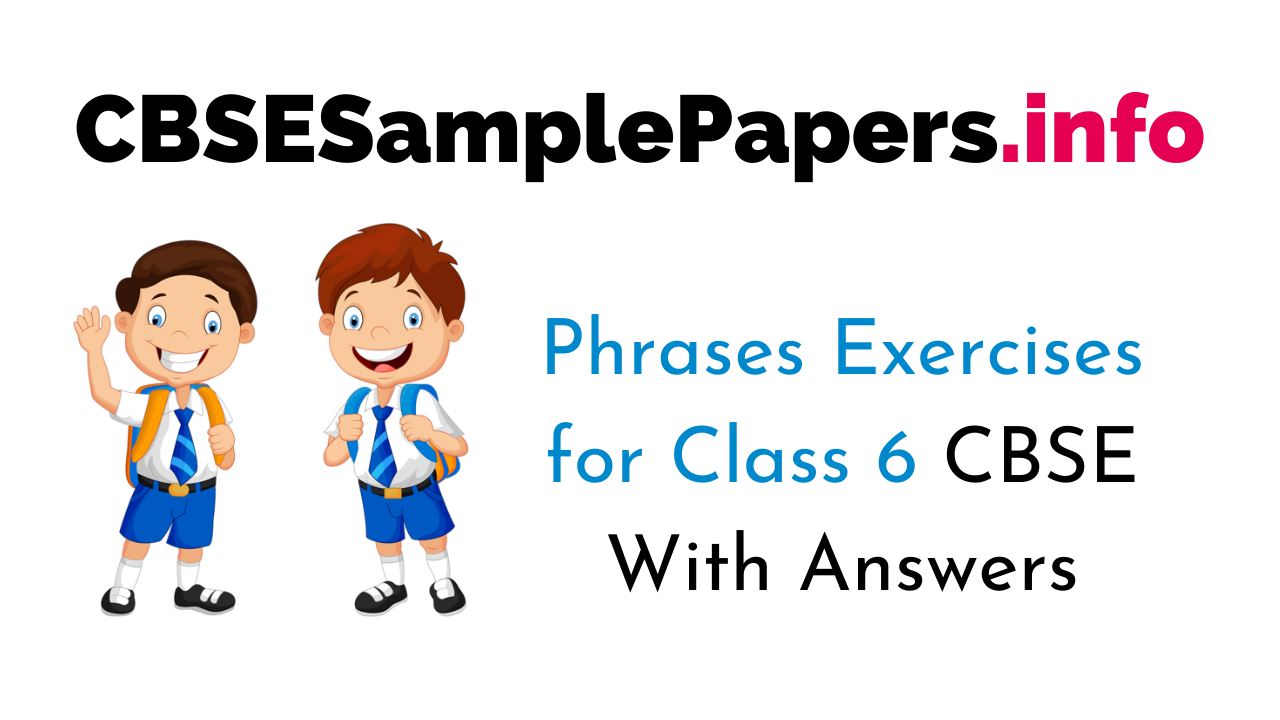 A phrase is a group of related words (within a sentence) without both subject and verb.
For example:

A phrase functions as a noun, verb, adverb, adjective or preposition in a sentence.

The function of a phrase depends on its construction (words it contains). On the basis of their functions and constructions, phrases are divided into various types i. e. noun phrase, verb phrase, adverb phrase, adjective phrase, preposition phrase, infinite phrase, participle phrase and gerund phrase.

1. Noun Phrase
A noun phrase consists of a noun and other related words (usually modifiers and determiners) which modify the noun. It functions like a noun in a sentence.

A noun phrase consists of a noun as the head word and other words (usually modifiers and determiners) which come after or before the noun. The whole phrase works as a noun in a sentence.

A sentence can also contain more than one noun phrase.
For example:

3. Adjective Phrase
An adjective phrase is a group of words that functions like an adjective in a sentence. It consists of adjective, modifier on any word that modifies a noun or pronoun.
Examples:

5. Verb Phrase
A verb phrase is a combination of main verb and its auxiliaries (helping verbs) in a sentence.
Examples

7. Gerund Phrase
A gerund phrase consists of a gerund (verb + ing) and modifiers or other words associated with the gerund. A gerund phrase acts as a noun in a sentence.
Examples

A. Identify the noun phrase in the following sentences.
1. I hope to win the first prize.
2. I tried to solve the puzzle.
3. Did you enjoy reading this book?
4. The boy wants to go home.
5. Horses prefer living in dark stables.
6. The accused refused to answer the question.
7. The boy denied stealing the money.
8. To write such rubbish is disgraceful.
9. I dislike having to punish my kids.
10. I will hate to do such a thing.

B. Complete the gaps with the expression as … as… or not as … as … using the adjectives provided and convert them into an adjective phrase. The first one has been done for you.

C. Underline the adverb phrase in the following sentences.

1. The fishers went sailing over the sea.
2. He lay beside the heap of corn.
3. She whispered in his ear.
4. He fought with all his might.
5. He shouted at the top of his voice.
6. It must be done at any cost.
7. Much water has run under the bridge.
8. Without pausing to consider he struck the blow.

E. Underline the gerund phrase in the sentences below.

1. Keeping a light on in the house helps to discourage robbers.
2. Mrs. Khanna enjoys playing piano.
3. I remember promising Sanjeev my old bike.
4. Standing during a two-hour train trip is not my idea of fun.
5. Do you like sailing in the lake?
6. Volunteering at the hospital is just one of Hema’s activities.
7. Mrs. Malhotra enjoys watching quiz shows on television.
8. Allow twenty minutes a pound for roasting the turkey.
9. Taking out the garbage is not my favourite job around the house.
10. Understanding a foreign language and speaking it well are two different things.

Fundamental:
A phrasal verb is a verb that is combined with a preposition (at, on, over, etc.) or adverb (back, down, off, etc.), and together has its own special meaning.

For example:
get away means escape; and speak up means speak louder.

Phrasal Verbs are frequently formed with: break, bring, call, carry, come, do, fall, get, go, keep, look, make, put, run, set, take, turn Some phrasal verbs retain the meaning of the original verb while some others have meaning completely different to the original verb. 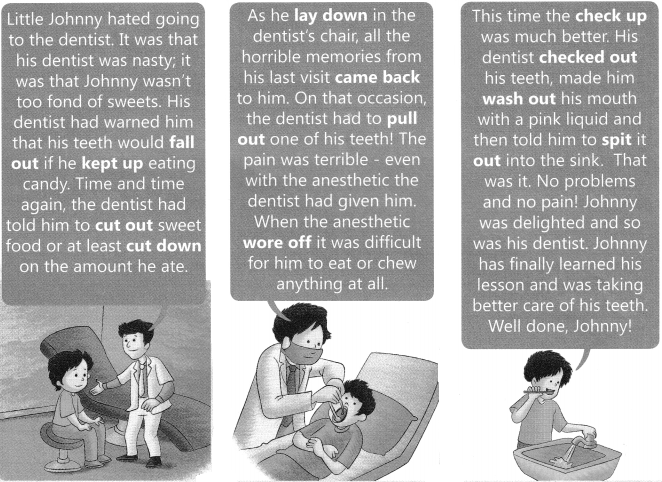 phrasal verbs with meaning and example for Class 6

A. Answer the following questions from the story above.

1. What did Johnny’s dentist warn him about his teeth?
2. What did dentist advice to do?
3. What happened to Johnny during last visit?
4. Why did Johnny feel happy at the end of the story?

B. Write down the meaning of the phrasal verbs given in the story above.

A. Complete the sentences with the help of phrasal verbs in the box. The first one has been done for you.
passed away, do without, look forward to, called off, made up, carried away, break out, run out, put up with, keep up

B. Complete the sentences with phrasai verbs. The first one has been done for you.