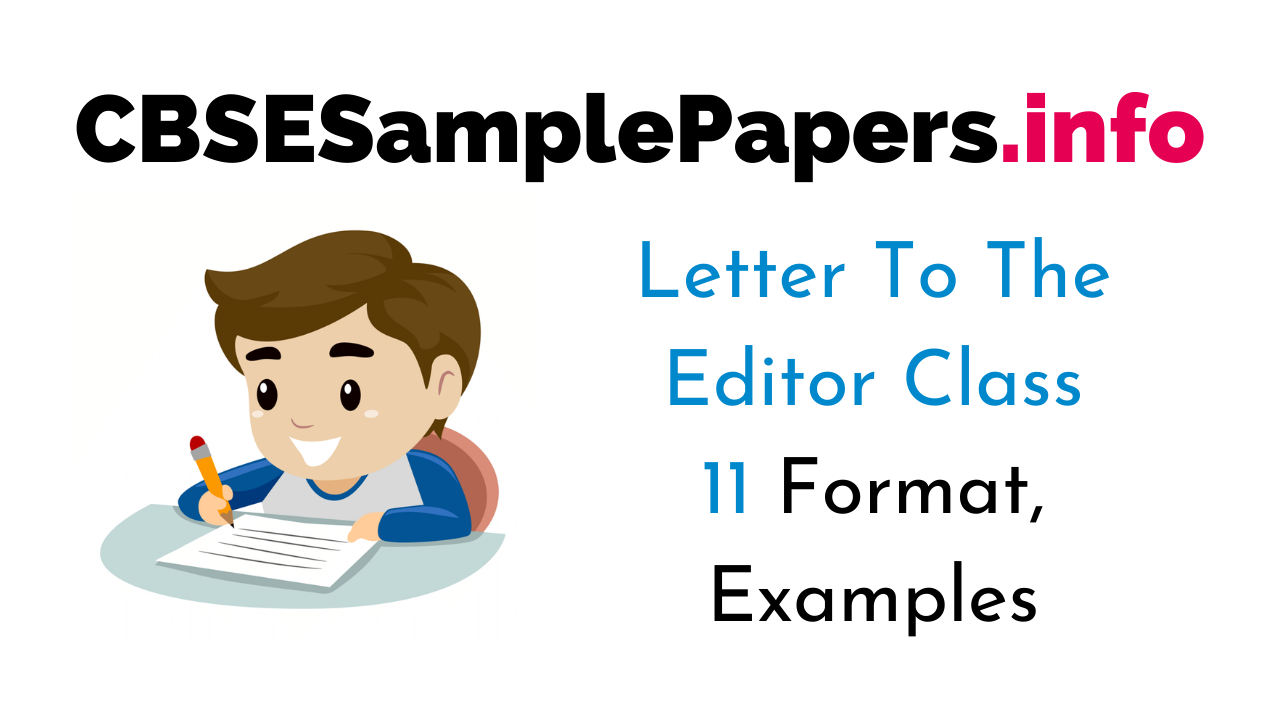 Letter writing is an essential skill. Despite the prevalence of emails and text messages, everyone has to write letters at some point. Letters of complaint, job applications, thank you letters, letters requesting changes or – making suggestions – the list goes on and on. Encouraging children to write letters from an early age will improve their communication, social and handwriting skills, and teach them what they need to know about writing and structuring letters.

Letter to the Editor section of a newspaper or magazine forms an important part of the paper. Such letters voice the opinion of the people and provide them a platform to express their agreement, disagreement or reaction to the news and views contained in the newspaper. These letters can also raise issues of social, political and economic interest and generally centre around public reactions. They also provide a forum to the readers to express their strong feelings and reactions to local, national and international issues. They are written in crisp and clear language in a matter of fact style. The language is formal and to the point.

Format Of Letter To The Editor
Write a letter to the Editor of ‘The Hindustan Times’, New Delhi, about water shortage in your locality. You are Rohan Pandit. 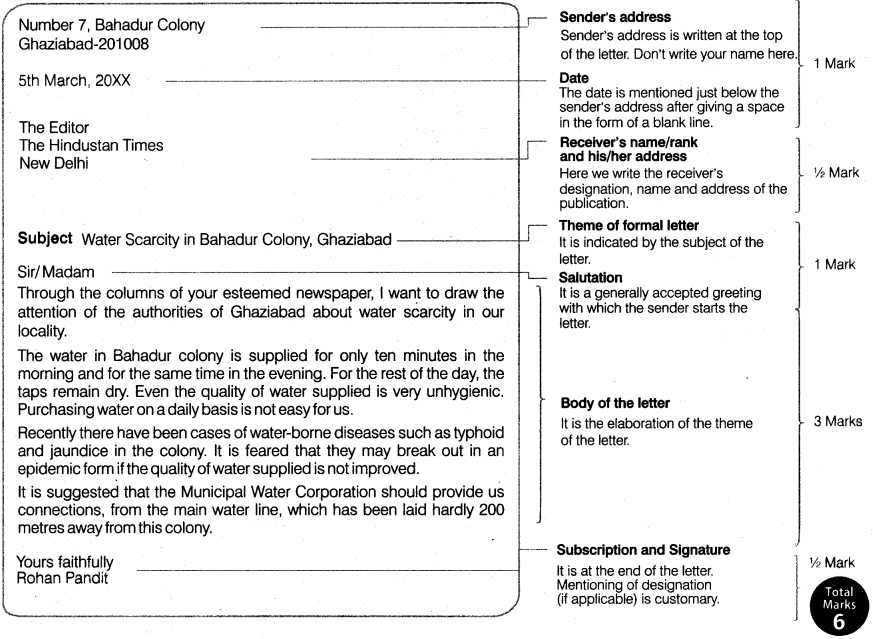 FREQUENT DIGGING UP OF ROADS

Question 2.
The youth of the country are very vigilant these days and feel concerned about the problems being faced by the people. Write a letter to the Editor of a national daily urging him to highlight the role of the youth in eradicating the problems of poverty, unemployment and corruption. You are Rani/ Rohit, 15, Gulbarga Society, Surat.
Answer:
15, Gulbarga Society
Surat-395005
20th October, 20XX
The Editor
The Times of India
Delhi-110002

You may bring it out as a news item, a feature or a story with actual photographs, so that everyone becomes aware that the youth of the country are very vigilant these days and feel concerned about the problems being faced by the people. Unfortunately, such news items are spotlighted rarely by the media. We, the youth of the country, look forward to better coverage of our activities which lead the country into an era of less corruption, more employment and no poverty.

Question 3.
Write a letter to the Editor of an English daily, appealing for help for the victims of flood. You are Rohit/Reena.
Answer:
43, Sukrit Street
Jorhat – 785002
1st July, 20XX
The Editor
The Hindustan Times
7, Kasturba Gandhi Marg
New Delhi-110001
Subject Help for the Victims of Flood

Sir,
I shall deem it a great favour if you publicise, in the columns of your esteemed daily, the miserable condition of the flood-stricken people of Bhrindan and other adjoining villages in Jorhat district of upper Assam. Also issue an appeal for help to these hard-hit people.

Due to heavy rains for three days and the breach of the Shanpur Bandh, the flood, all of a sudden, entered these villages on the 27th of June. It caused havoc, as many huts were washed away. Many people died as they were trapped inside their homes by the rising flood water. Some of the affected people are passing their days on trees and are without food, clothing and shelter. Parents have been separated from their children. Help has not yet reached these villages. Rescue teams with medicine and food are yet to arrive.

I therefore, request you to publish this letter so as to appeal to the public to come forward and help these homeless victims of the flood before it is too late.

Question 4.
You have noticed many stray animals on the road during the busy hours of the day. These animals cause traffic jams as well as accidents. You have already written to the concerned authorities but no action has been taken so far. Write a letter to the Editor, The Hindu, drawing the attention of the Municipal Commissioner, Chennai to this problem. You are Shantha/Suresh, 12 MG Road, Chennai.
Answer:
12, MG Road,
Chennai-600001
9th March, 20XX
The Editor
The Hindu Chennai-600001

Sir,
Through the columns of your esteemed daily, I would like to draw the attention of the Municipal Commissioner to the problems caused by stray animals on city roads. Not a single day passes when we don’t witness traffic jams on the roads. The reason for these jams are not heavy traffic movement, but stray animals roaming about on the roads.

These animals not only cause traffic jams but also create severe accidents. Just three days ago I witnessed a biker chased by dogs. He tried to drive away, in the process jumping a red light and meeting with an accident. Yesterday a bull gored a person so badly that he needed to be admitted to a hospital.

Despite many complaints to the concerned authorities, no action has been taken so far. These stray animals are becoming a nuisance. They are a danger to not only us but to themselves also. It is my request to the Municipal Commissioner to please take a note of the situation and rectify it as soon as possible.

You are Ashutosh/Ashita Sarin, residing at 28, H-Block, Ashok Vihar, Delhi. You love Delhi and its beautiful architecture. Recently you visited the Red Fort and were disturbed to see the poor maintenance of the monument by the authorities concerned as well as by the careless and negligent attitude of the visitors who spoil the buildings by writing names, messages on the walls, domes, etc. Write a letter to the Editor, The Statesman, expressing concern over this state and the need for awakening a sense of pride and love for such monuments among the common people.
Answer:
28, H-Block
Ashok Vihar
Delhi
12 June 20XX
The Editor
The Statesman
New Delhi
Sub: Poor Maintenance of Monuments
Sir,
Through the columns of your esteemed newspaper, I would like to assert the fact that we Indians, particularly Delhiites do not value our heritage. We carelessly spoil our treasures. It can be seen in the attitude of our people towards the historical monuments. Delhi is rich in monuments. In Europe, such a legacy would be preserved and beautified but here it is spoiled and ruined by our own people through sheer ignorance, carelessness, laziness, and disregard. In case you happen to visit the Red Fort, you will find not history but romantic messages.
We must be proud of our city and its heritage. Then only we will be motivated to preserve its beauty and elegance. I appeal to fellow citizens to open their eyes and fall in love with the beauty of our city and help in its proper maintenance.
Yours faithfully
Ashita Sarin

1. You are the Secretary, Environment Club of your school. When you visited a few places of historical interest, you realised that we need to protect our environment. Write in 120-150 words a letter to the Editor of a national daily about the need to create awareness among the people about protecting the environment.

2. Write a letter to the editor of ‘The Times of India’, New Delhi, giving your views on the necessity of promoting English speaking in India for better communication with tourists.

3. Write a letter to the Editor of ‘The Indian Express’ requesting him to publish more news on ‘Empowering of Women’ to enthuse the female readers of the newspaper.

4. Write a letter to the Editor of ‘The Hindu’ to point out the inconvenience caused by street vendors crowding the pavements of the arterial roads in the city, forcing the pedestrians on to the roads. This ’causes accidents and even deaths of pedestrians. Also outline a plan to overcome this problem.

5. You are Tarun / Tanuja, J Block, Apple Apartments, New Street, Secunderabad. Write a letter to the Editor of a local daily expressing your views on the growing menace of stray cows in your city.

6. You are Rohan / Rohini of 48, New Bank Enclave, Lucknow. Write a letter to the Editor of a local daily complaining about the badly maintained parks of your colony.