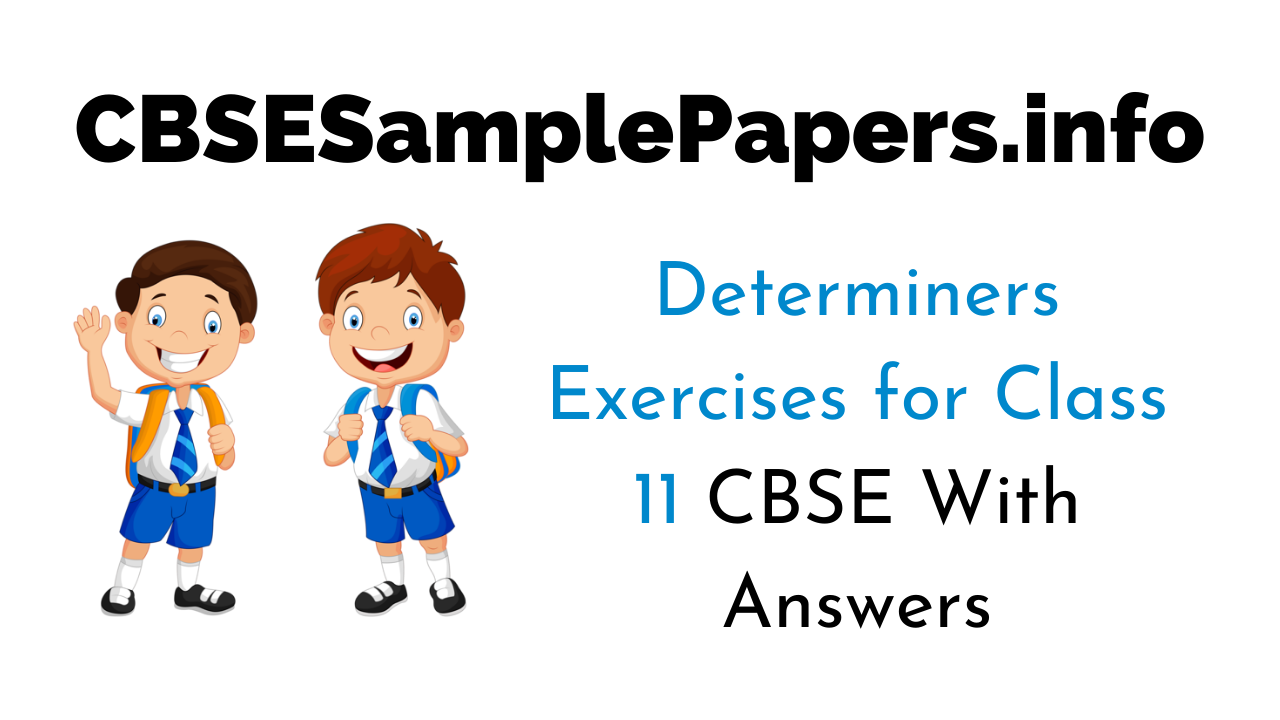 Determiners are words that come before nouns. They contain several classes of words, including pronouns and adjectives. They determine or limit the noun by giving some additional information about it. Determiners show whether a noun refers to is a general or a specific object, person, or place. They indicate which or how many things the noun refers to. Determiners define or limit a noun to the singular or plural. They indicate the amount or quantity. Determiners and nouns together make noun phrases. They make noun phrases with adjectives too. Determiners may precede numerals too.

Classification of Determiners In English Grammar

Determiners can be classified into

How to Use A and ‘An’
The use of ‘a’ and ‘an’ is determined by sound. The following words begin with a vowel, but not with a vowel sound. A unique thing, a one rupee coin, a European, a unicorn, a university, a useful thing, a union.

On the other hand, with the following words, ‘an’ is used although they begin with a consonant.

An hour, an honest man, an heir to the throne, an MCA. Here, the sound is the criterion to decide whether a/an will be used.

Omission of Article ‘The’

2. Demonstrative Adjectives
(This, That, These, Those)
I. That (in case of plural, those)
(a) It is used to avoid the repetition of the preceding noun(s). e.g.

II. This (in case of plural, these)
(a) It refers to persons or thing(s) near the speaker, e.g.

Question 2.
Fill in the blanks using this, that, these or those.
(a) is my wife.
(b) Could you bring me book I left in the garden?
(c) Many parents complain about their children days.
(d) The jeans you have bought today are better than you bought last month.
Answer:
(a) This
(b) that
(c) these
(d) those

3. Quantifiers
‘Some’, ‘many’, ‘a lot of’ and ‘a few’ are examples of quantifiers. Quantifiers can be used in affirmative sentences, questions, requests or commands with both countable and uncountable nouns. e.g.

Examples of quantifiers are given below

Usage of quantifiers are as follows

I. Use of few/a few and little/a little
(a) Few and a few.
Few emphasises the lack of something,
e.g.
There are few sweets left in the jar.
(We should be careful not to eat them too quickly because they are almost finished.)

A few emphasises that something still remains,
e.g.
We still have a few minutes left before the class gets over. Do you have any questions?
(We still have some time, so we should use it.)

(b) Litde and a litde
Litde emphasises the lack of something,
e.g.
We have little money right now; we should go out for dinner another day.
(We should be careful and use the money wisely because we don’t have much.)

A little emphasises that something still remains, e.g.
e.g.
There’s a little ice-cream left; who will eat it?
(There’s not enough ice-cream left to put back in the freezer, so it should be eaten.)

II. Use of much and many
(a) We use much with singular uncountable nouns and many with plural nouns.

III. Use of more, less and fewer (comparative determiners)
We use more or less before singular uncountable nouns by adding than after it, or for an additional or lesser quantity of something, e.g.

We use fewer before plural countable nouns to refer to a group of things smaller than another. e.g.

V. Use of most, several and all
(a) We usually use most with plural uncountable nouns, e.g.

(b) We usually use several with plural nouns, but it refers to a number which is not very large, (i.e. less than most)

VII. Use of either and neither
(a) We use either to refer to two things, people, situations etc. It may mean one or the other of two or each of the two. e.g.

(b) We use neither with only singular countable nouns and a singular verb. Neither is the negative of either, e.g.

We use different possessive determiners depending on who owns the thing we are talking about.

Determiners and Kinds of Nouns With Which They are Used

2. Fill in the blanks with quantifiers from the options given. Hints are given in brackets to guide you.
(i) There’s hardly ……….. sunlight in London in the winter. (I expect you will say ‘yes’, because Lodon is too much cold.)
(a) some
(b) any
(c) many
(d) few
Answer:
(b) any

Editing Tasks
The following passage has not been edited. There is an error in each line against which blanks are given. Write the incorrect word and the correction in the spaces provided. Remember to underline the word that you have supplied.

Reordering of Sentences
Rearrange the parts of the sentence in correct order.
1. P : were flying about
Q : with delight
R : the birds
S : and twittering
(a) RPSQ
(b) RPQS
(c) SQRP
(d) SPRQ
Answer:
(a) RPSQ