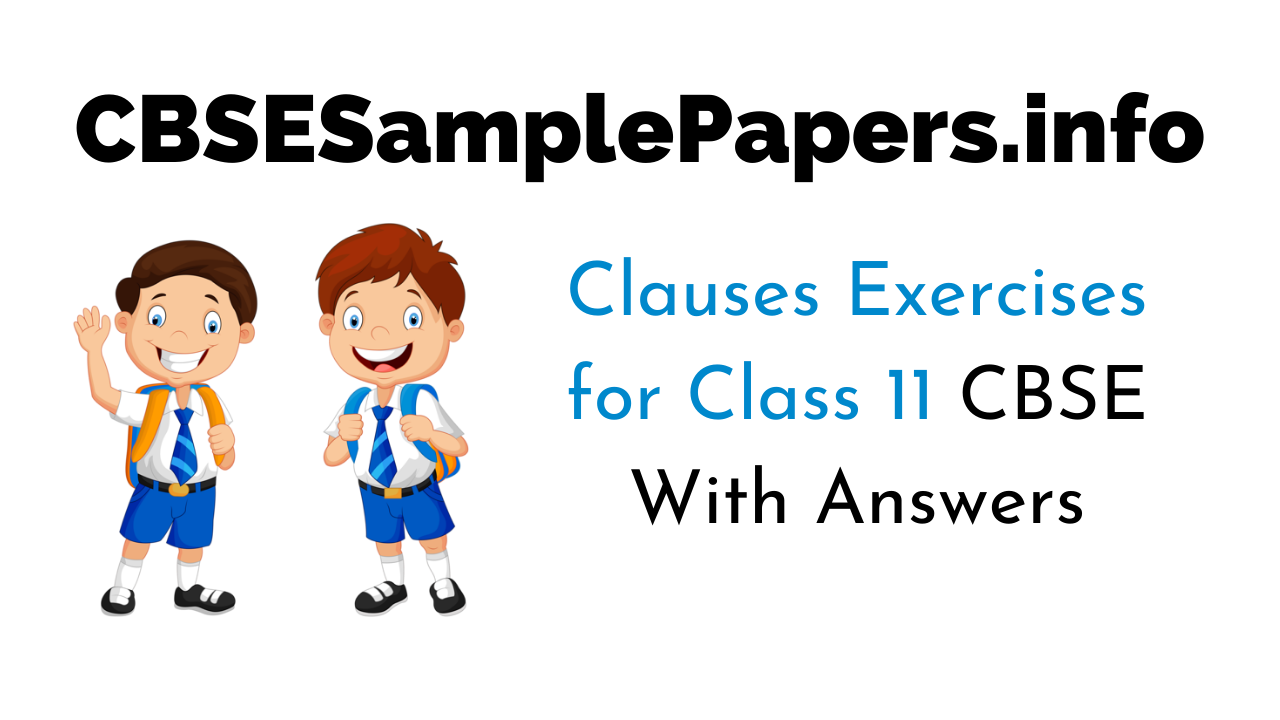 A clause is a group of words that has a subject and a predicate. It contains a verb and sometimes other components too. So, how do we distinguish what is a clause and how exactly is it different from a phrase?

A clause is a group of related words containing a subject and a verb. A clause is a larger word group than a phrase and includes a litde more information.

Types of Clauses
There are two types of clauses

2. Dependent Clause (Subordinate Clause)
A dependent clause is a subordinate clause, it starts with subordinate words. It cannot stand alone as a sentence and is labelled according to its function in the sentence.
Dependent clauses are further divided into three kinds

(i) Noun Clause
A noun clause is a dependent clause that acts as a noun. Noun clauses begin with words such as how, that, what, whatever, when, where, whether, which, whichever, who, whoever, whom, whomever and why. These words generally come before the subject and the verb of the noun clause. Noun clauses can act as subjects, direct objects, indirect objects, predicate nominatives, or objects of a preposition, e g.

1. Complete each sentence with a properly formed norm clause by selecting from the options given.
(a) Ravi asked me (where was his wallet/where his wallet was).
(b) I don’t know (how many children he has/how many children does he have).
(c) (How close we are/How close are we) is not important.
(d) (What did she say/What she said) was sad.
(e) We are not responsible for (what our children say/what do our children say).

2. Complete each sentence with what or that. In this question, what is used for norm clauses and that is used for relative clauses.
(a) he said is not important.
(b) The book I’m reading is very interesting.
(c) The world needs more people help animals to survive.
(d) Many of the people saw that movie were disappointed.
(e) Do you believe he told us? Yes, I think he was telling the truth.

(iii) Adverb Clause
An adverb clause (also called adverbial clause) is a word or expression in a sentence that functions as an adverb; it tells you something about how the action in the verb was done. It adds extra information about the time, place, manner etc to a sentence and modifies the verb.

(a) Adverb Clause of Time We use adverb clause of time to modify a verb in the main clause and to tell the time when an action takes place. Subordinating Conjunctions used are when, whenever, anytime, before, after, till, until, while, since, just as, as soon as, as often as, now that, as long as etc. e.g.

(b) Adverb Clause of Condition We use adverb clause of condition to modify a verb in the main clause and to tell the condition under which an action takes place or someone does something. Subordinating Conjunctions used are if, even if, whether, if…..not, unless, supposing that, provided that, in the condition that, as long as that etc. e.g.

Uses of Clauses
By using clauses correctly, you can quickly and easily improve the quality of your writing and your ability to communicate with the reader. With the help of a clause, you can direct the attention of the reader so that your sentence is understood.

You will also avoid incorrect dependent clauses as sentence fragments.

Phrases and Clauses Exercises for Class 11 CBSE with Answers

Clauses at a Glance

If the sentence is:

Question 1.
When KKR win tomorrow they will be champions.
(a) If
(b) Whenever
(c) Unless
(d) No correction
Answer:

Question 3.
I wouldn’t mind have some chips and cake.
(a) to having
(b) having
(c) to having
(d) No correction
Answer:

Question 4.
You are pardoned that you have confessed your crime.
(a) because
(b) so
(c) when
(d) No correction
Answer:

Question 5.
Wait while the train stops at the station.
(a) when
(b) till
(c) as
(d) No correction
Answer:

Question 6.
He told me who he had passed the final examination.
(a) so
(b) why
(c) that
(d) No correction
Answer:

Question 9.
They study in a school whose principal is very old.
(a) where
(b) which
(c) whom
(d) No correction
Answer:

Question 10.
The company which my brother works is in Canada.
(a) where
(b) that
(c) why
(d) No correction
Answer:

Question 12.
When the teacher is not in class we can do wherever we want.
(a) whomever
(b) whenever
(c) whatever
(d) No correction
Answer:

Question 13.
You can give the gift to who you want.
(a) whenever
(b) whomever
(c) whenever
(d) No correction
Answer:

Question 14.
Because I studied hard, I could not pass the exam.
(a) When
(b) If
(c) Although
(d) No correction
Answer:

Question 16.
The match will be postponed when it rains.
(a) whenever
(b) if
(c) as
(d) No correction
Answer:

Question 18.
Until you practice hard you cannot get good marks in Maths,
(a) Till
(b) Unless
(c) As
(d) No correction
Answer:

Question 20.
The match is not over unless the last ball is bowled.
(a) when
(b) where
(c) until
(d) No correction
Answer: